It's been more than a year that we pulled into Rock Hall/Maryland to end our sailing adventure of two years and to start a landlubber's life once again. In the meantime Habibi has found new owners and we are certain that they care for her as much as we did.

What remains are thousands of pictures and countless memories, good and bad. This short video is a collection of pictures we think represent our journey best. You're free to just watch it OR you can first read our brief summary below with links to the corresponding blog entries to get an idea of where we've been during those two years.

Either way, we'd like to thank all of you out there who joined and supported us on this ride. And even though we stopped cruising, we're still open for answering questions of all sorts regarding cruising.
Now, kick back and enjoy the show!


The picture below shows us on our maiden voyage right after we had left the dock in Rock Hall/ Maryland back in October 2011.


After winning the battle against the stinging flies (and the Coast Guard - but that's another story...) in the Delaware Bay we faced our very last anchoring maneuver behind Reedy Island in the Delaware River.

I was a bit nervous behind the helm as in order to reach the anchorage you have to pass through a gap in a dyke. And if this wasn't enough fun, the gap was quite narrow, the dyke submerged and on top of that the current ran with around 2.5 knots! Thinking of our friends Chris and Steve on Scott-Free who'd successfully done it before I pulled myself together, gave full throttle and steered Habibi through the gap without any problems. But the challenge wasn't over yet... we had to drop anchor in a racing current! Luckily there was no other boat in the anchorage and we had plenty of room to maneuver. Having done that, we had to make sure the anchor was well set as the current would change at some point during the night and turn the boat in the opposite direction. All went well and we spent a quiet last night at anchor.


The next morning we raised the anchor at the first light, slipped through THE GAP into the Delaware River and headed North for about four miles. 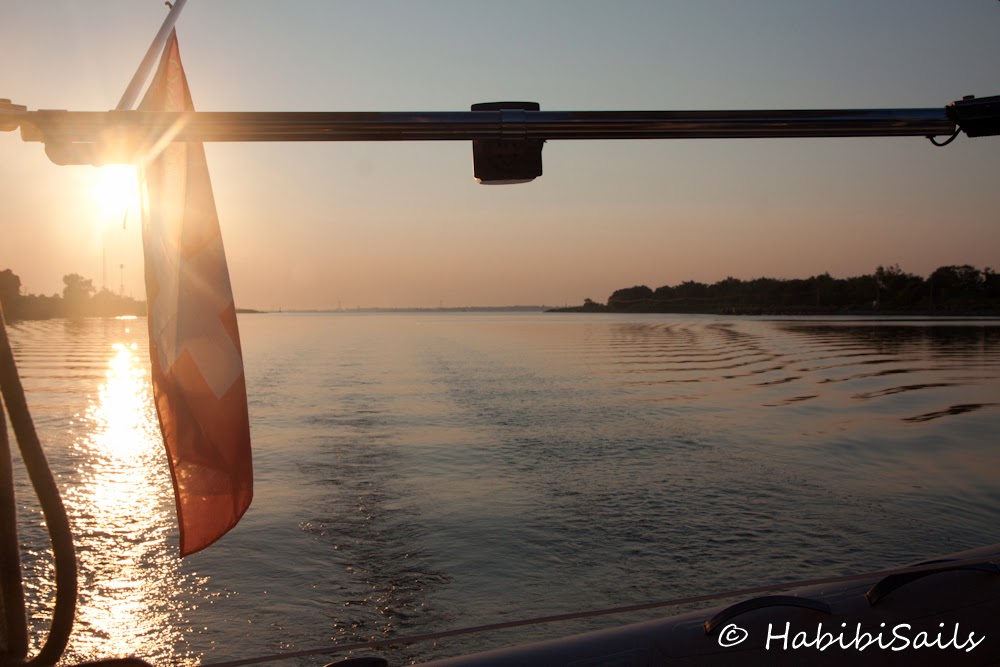 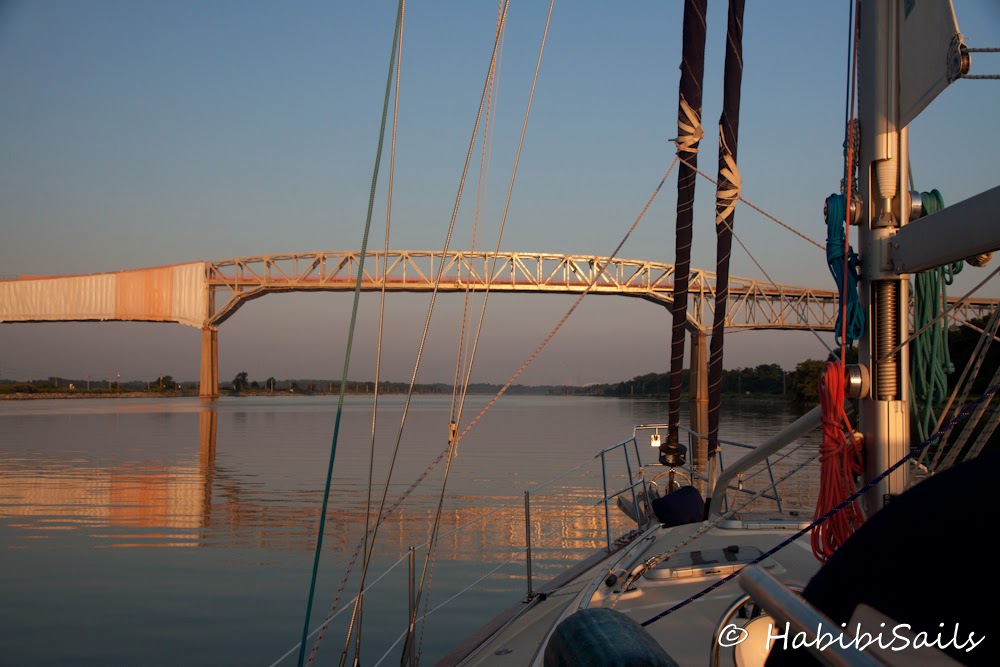 Then we turned West into the C&D (Chesapeake and Delaware) Canal. Once again we had calculated the tide right and were slightly pushed through the 14 miles of water towards the Chesapeake Bay. Where was everybody?! Also here we didn't encounter a single boat. It was so calm - the water was like a mirror. 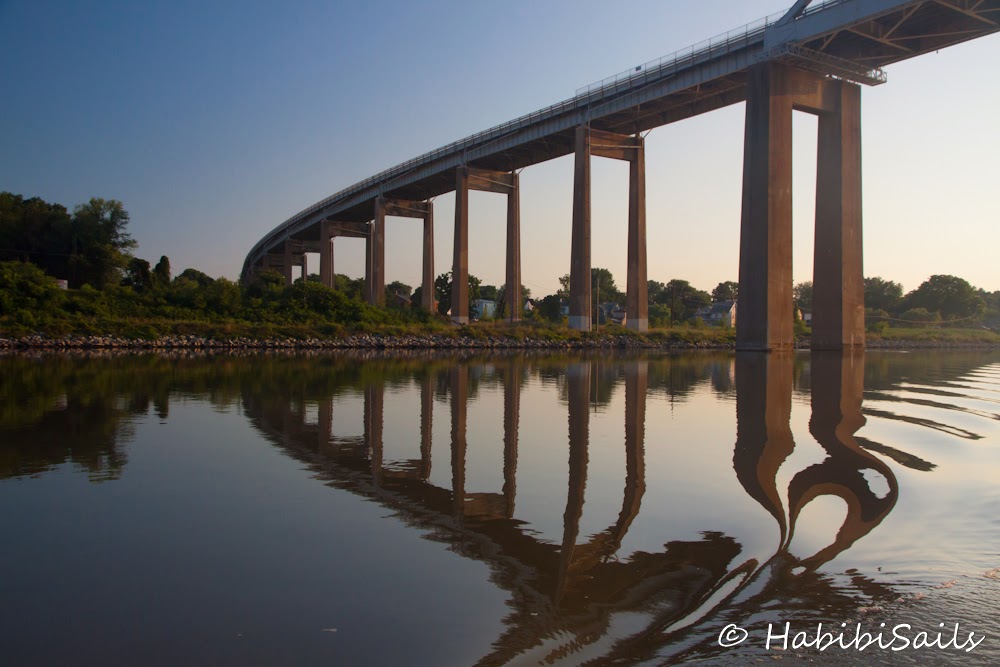 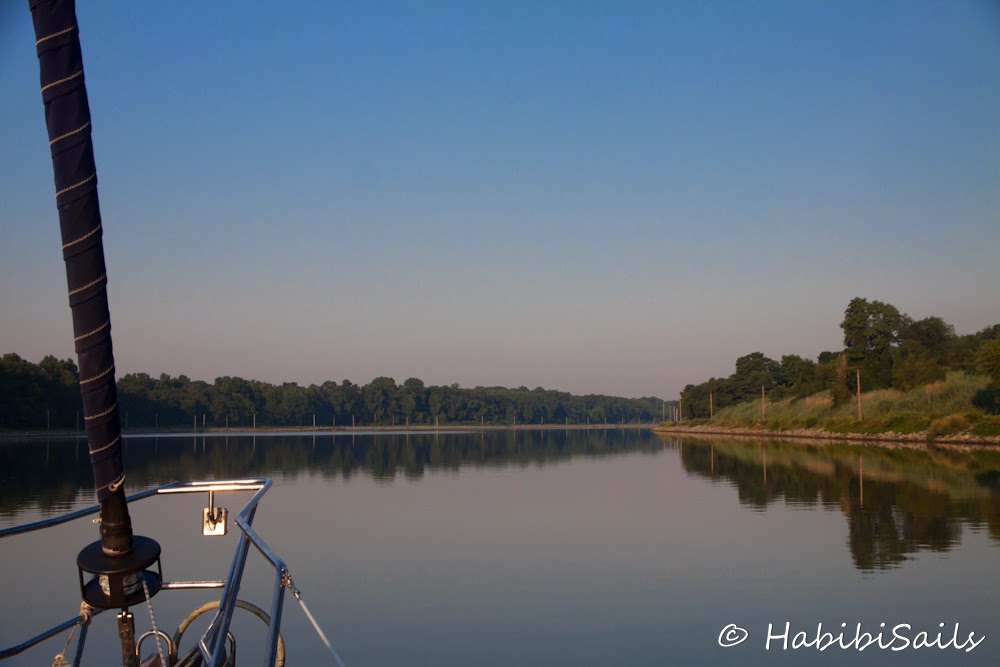 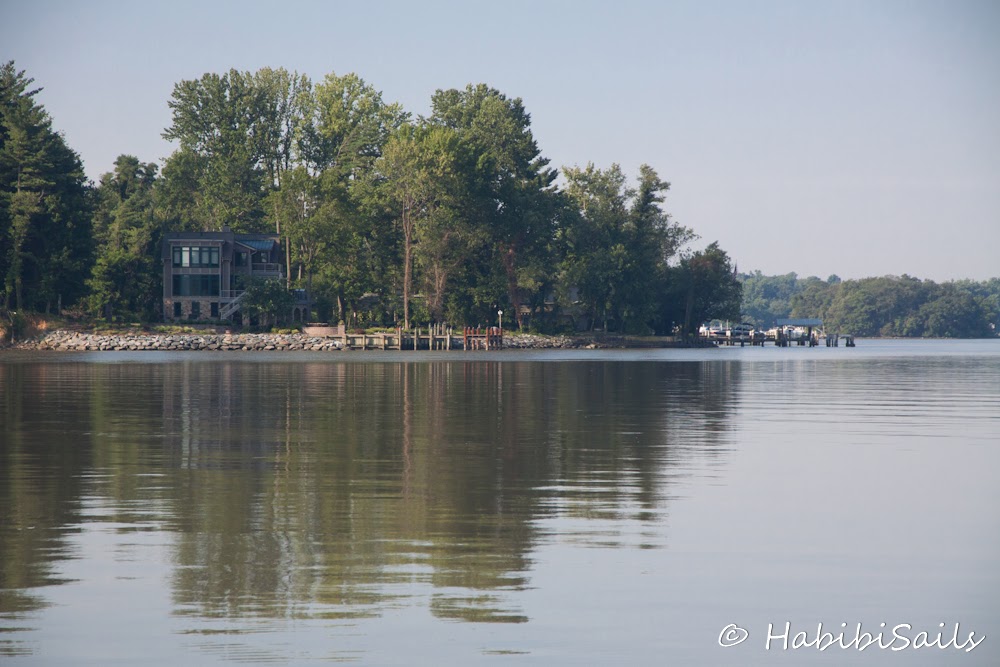 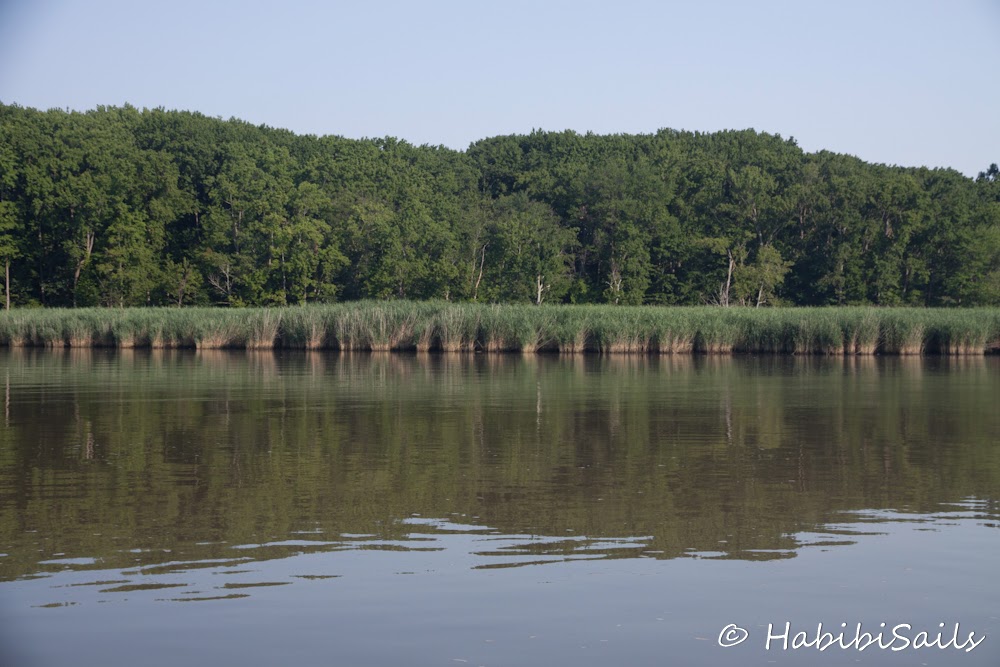 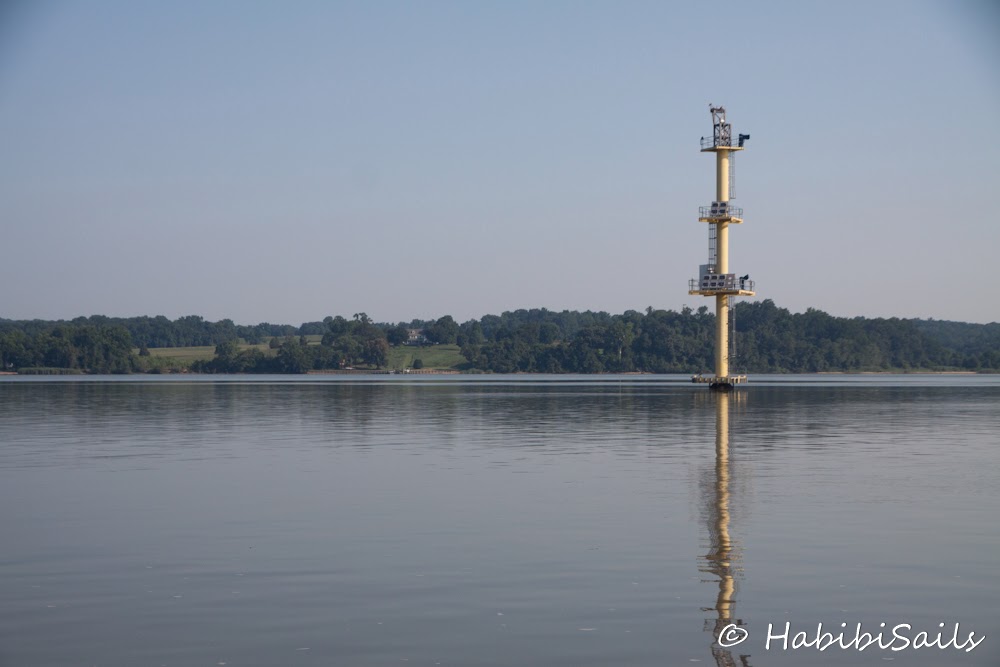 Being middle of July with the sun rising the temperatures did rise too. We saw many diseased fish floating by and wondered if this had anything to do with the high water temperatures? The water isn't very deep and is therefore able to heat up quickly. 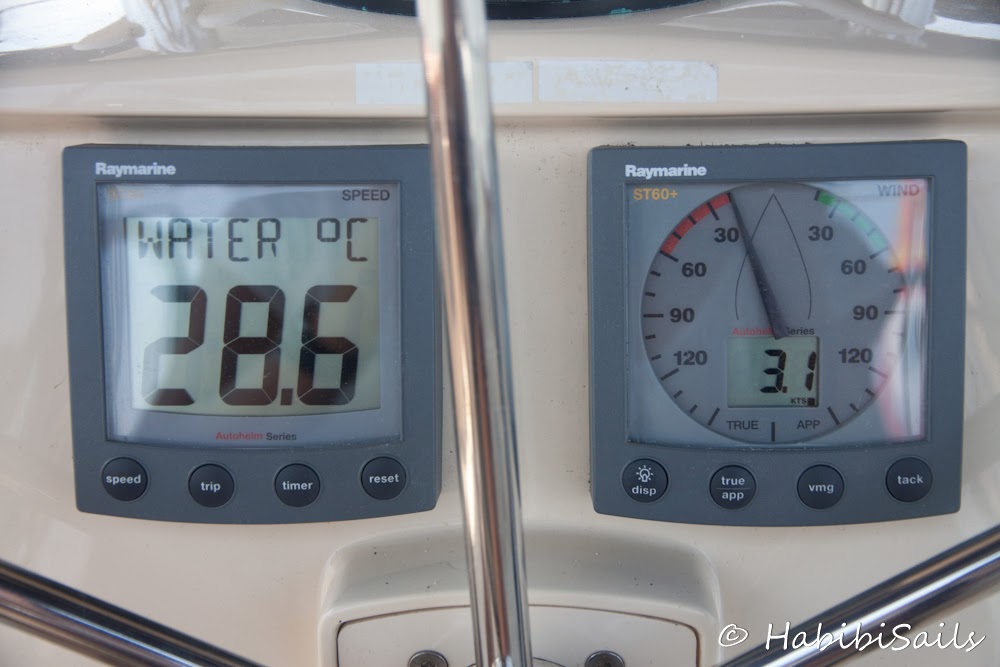 Approaching the end of the C&D Canal and entering the Chesapeake Bay we started to pass a few boats heading the other direction. We guessed it was more the time to head North than South as we did. 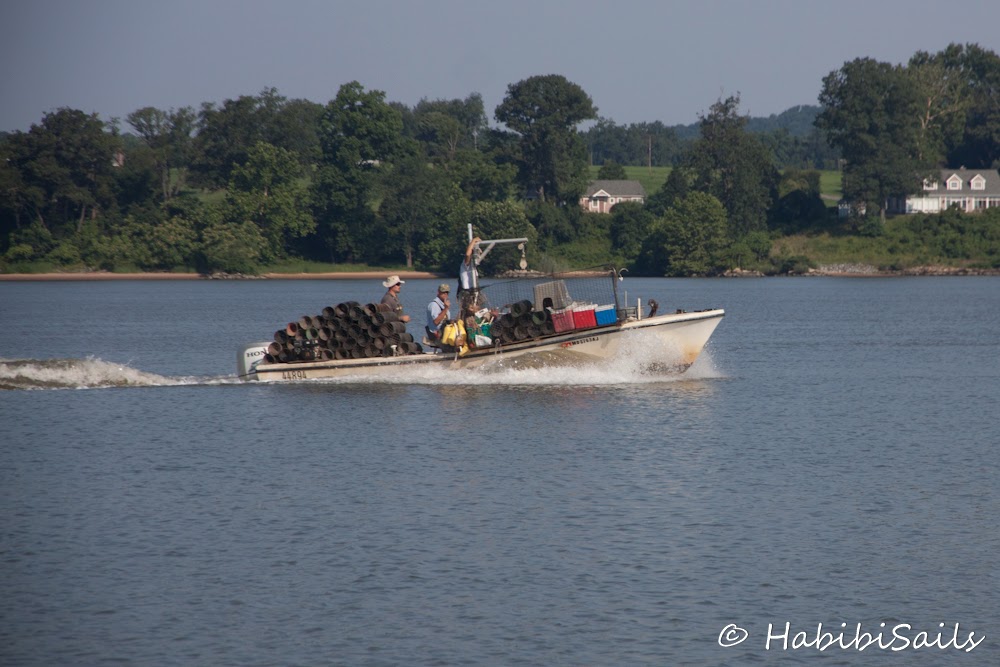 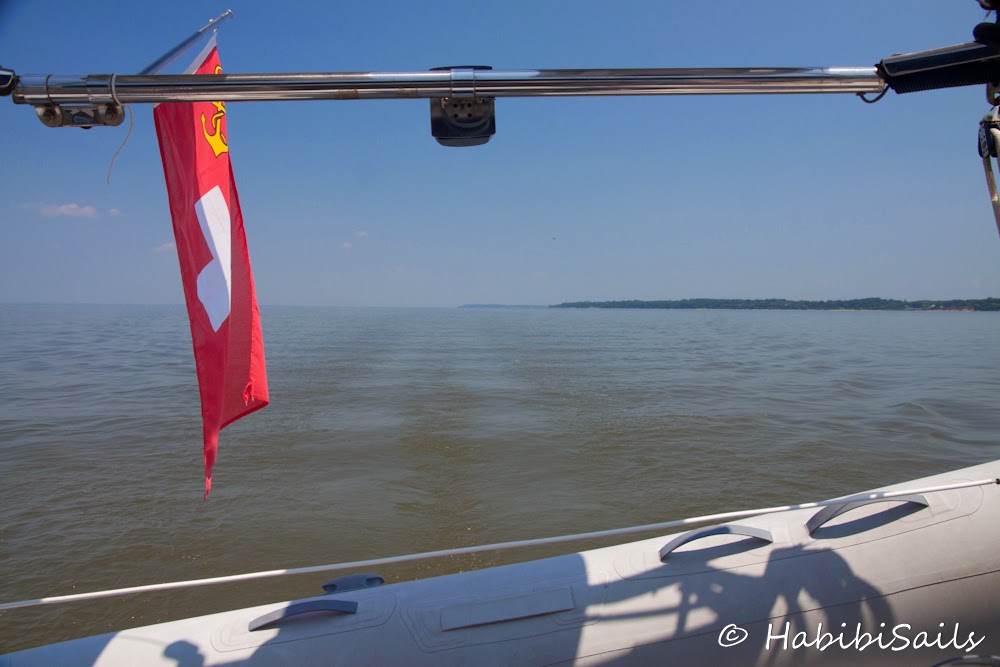 It was so dead calm we didn't bother to pull out a sail and motored all the way. And we even opened the hatches what we usually never did while underway. But as there was no wind and no waves there was no chance water would splash over the deck. It was even safe to sit in the cockpit with the laptop on the knees... 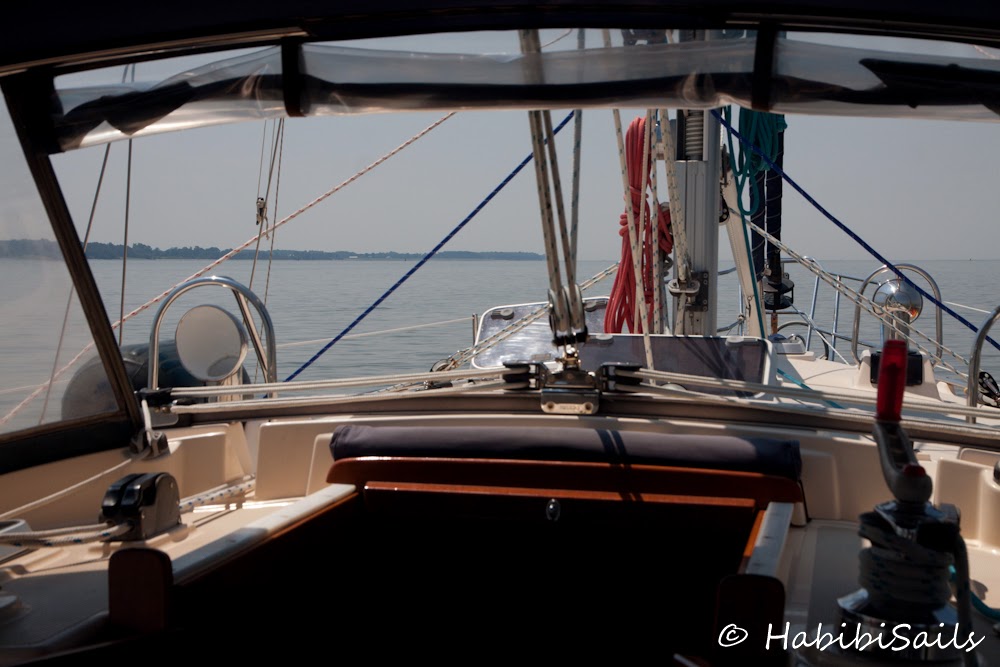 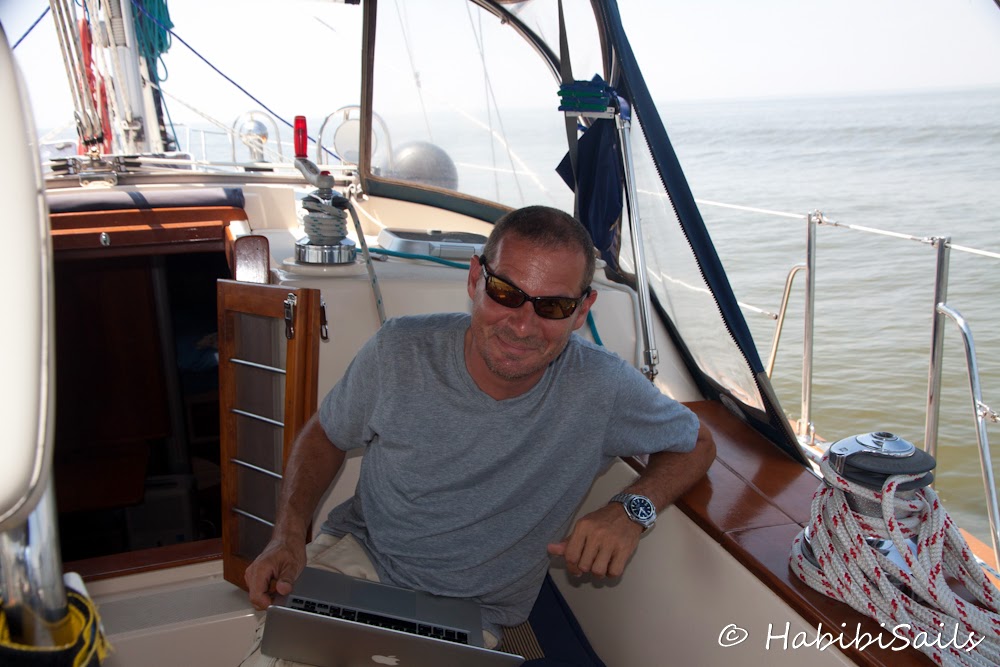 We were actually a bit disappointed - this was supposed to be our last sailing trip and there was no "sailing" at all! 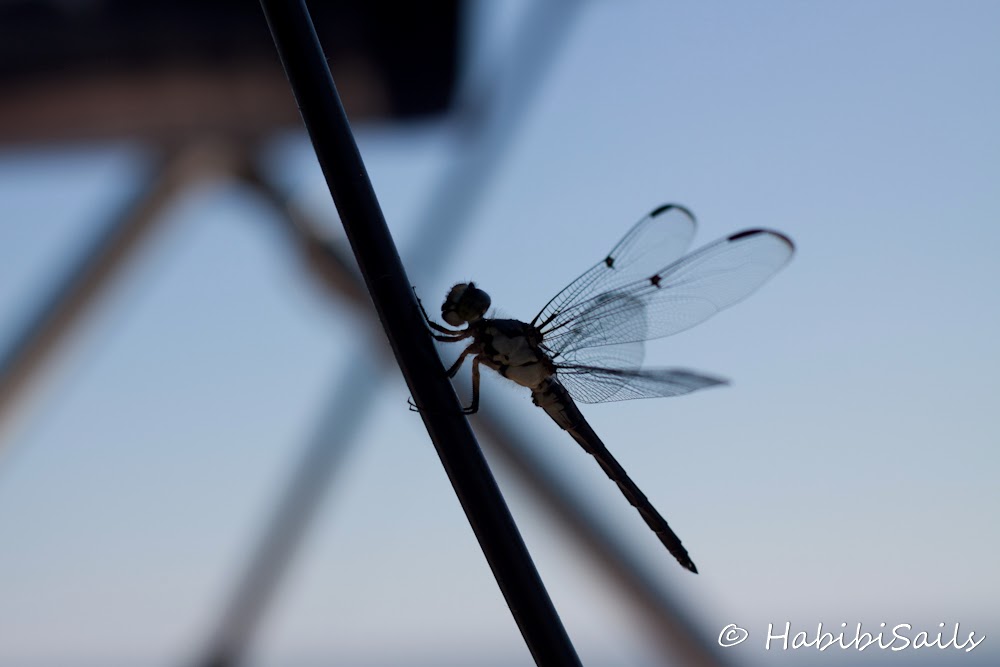 We experienced a more or less uneventful sail from New York down South towards the Chesapeake Bay area - well, we managed to escape a few squalls and not to pick up one of the numerous lobster pots on the way. Ah, and a school of dolphins accompanied us for a while...


When entering the Delaware Bay we encountered a well known phenomena (which, truth be told, had nothing to do with our shower intervals!): all of a sudden sting flies, hundreds of them, circled the boat!


And even though the ground forces fought hard and killed dozens of them, relief came finally from the Odonatas (we called them thankfully our little Spitfires). We had up to 10 of them in monster sizes flying in and out of the cockpit to kill as many intruders they could get!


And all of a sudden the flies disappeared as quickly as they had shown up - and with them our knights in shining armor. Thanks nature for sending us help to win this battle!
No comments:

Flashback: biting through the big apple 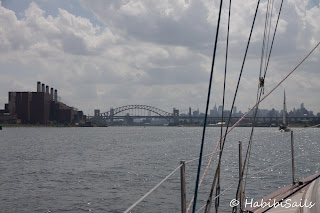 I guess everyone has some sort of a bucket list. A list with things one wishes to do, see, accomplish during his/her life. Marco already could tick one thing off of his list:
And now there was something else, it could be combined with:
After Block Island we had to decide if we either sail directly to the Chesapeake Bay - an offshore passage that would bring us faster to our final destination in Maryland. But we would miss Long Island Sound and more importantly New York City. After some consideration we decided to take the longer route through Long Island Sound. Yes, we actually had to rush because of our ill family member but it looked like we could risk to make a detour to fulfill a long-term dream!


And we quickly understood why this waters are so popular among sailors. It reminded us of sailing on our "home lake" Lake of Constance back in Switzerland. There are countless nice spots to point your bow at just within reach of a couple of hours sailing in perfect conditions.

Due to lack of time we just hopped along the Northern shore of Long Island, NY and unfortunately missed the coast of Connecticut altogether. First place to drop the hook was in Three Miles Harbor, a huge and protected anchorage just a view miles away from the famous Hamptons and Sag Harbor. We stayed there till the day after 4th of July and what usually ends up with lots of boats battling for a nice anchor spot and noise all night long happened to be the most peaceful place on earth!
We quickly made our way West, with short stops in Port Jefferson (much more boats there!), Oyster Bay (also very nice anchorage but very sleepy town) and finally in Port Washington where we took one of the town moorings, that are 48h for free and after that cost USD 25 including complimentary launch service. It's a safe place to leave the boat while exploring NYC (there's a train station a 20min walk into town) AND it's perfect to time the passage through the East River!


So, what's the deal with this East River and timing it right? According to our sailing guides the East River isn't a river! It's actually a tidal strait, connecting Upper New York Bay with Long Island Sound. And as we mentioned in a previous post one thing we had to learn in this waters was to check the tides and currents - and the East River has some very strong current flows that can reach up to 7 knots (cruising speed on our sailboat is max 6 knots)! Just imagine you've got that mess against you... So the plan was to have the current WITH us. There is one spot which needs utmost attention in this planning process (and the name says it all): HELL GATE. It marks somehow the middle of the East River with the strongest tidal current, heavy swirls and boils, a channel dog leg in a narrow section of the river and heavy commercial traffic. In other words: we wanted to time our passage just right!

Off we went to dig our noses into our guides and tidal current tables and decided to time our passage as follows:
To have a fair current all the way we checked the time of 1. "Slack Water – Ebb Begins" at Hell Gate (The tidal current floods North & East and Ebbs South & West in the East River) and 2. "High Tide" at the Battery.
On our designated travel day, 14th July 2013, No. 1 was at 14.51, and No. 2 at 12.24. We untied the mooring lines in Port Washington at 12.50 with the intention to shoot for slack water or starting Ebb at Hell Gate.


It was a very hot day with almost no breeze. As we did this passage the first time we were a bit nervous and motor-sailed the first stretch. When it got more busy and tight we decided to roll in the sails and to just use the engine. I think we were lucky to travel on a Sunday as we didn't see too many commercial vessels passing by.


Then Hell Gate came into sight and it looked like we'd timed it just right. When we passed the legendary spot we just saw the water bubbling a little bit and the current kicked right in - flowing WITH us. Phew...


We were relieved and started to enjoy the ride past Upper East Side, Ed Queensboro Bridge with the Roosevelt Island aerial Tramway, the U.N. Headquarter and the Empire State Building. 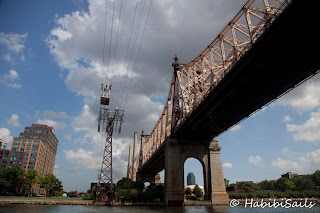 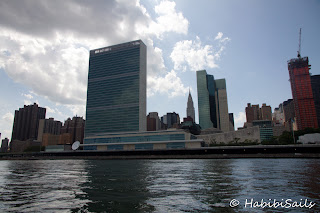 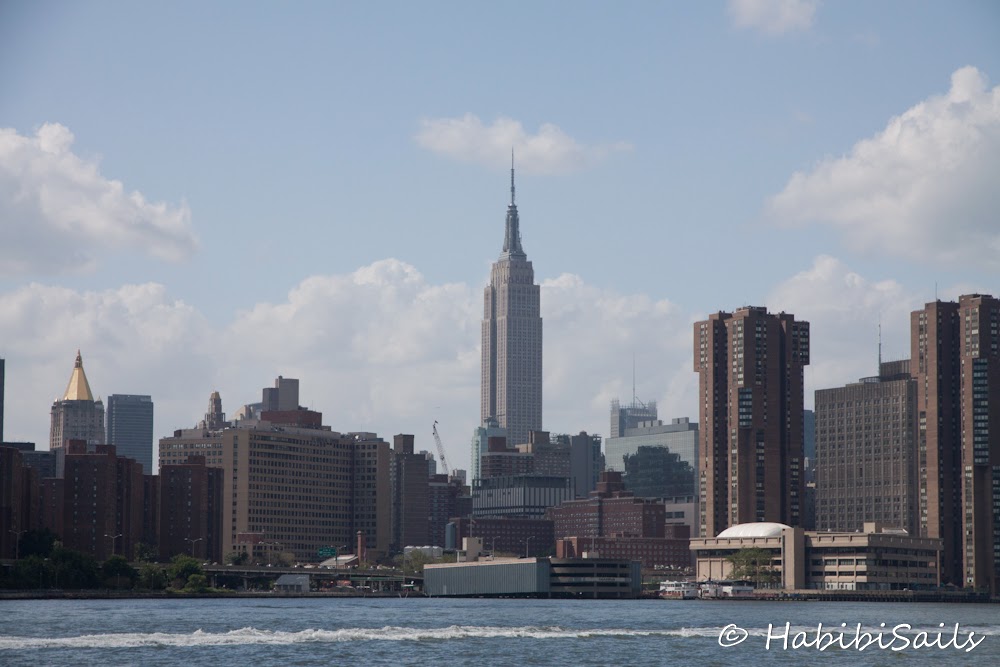 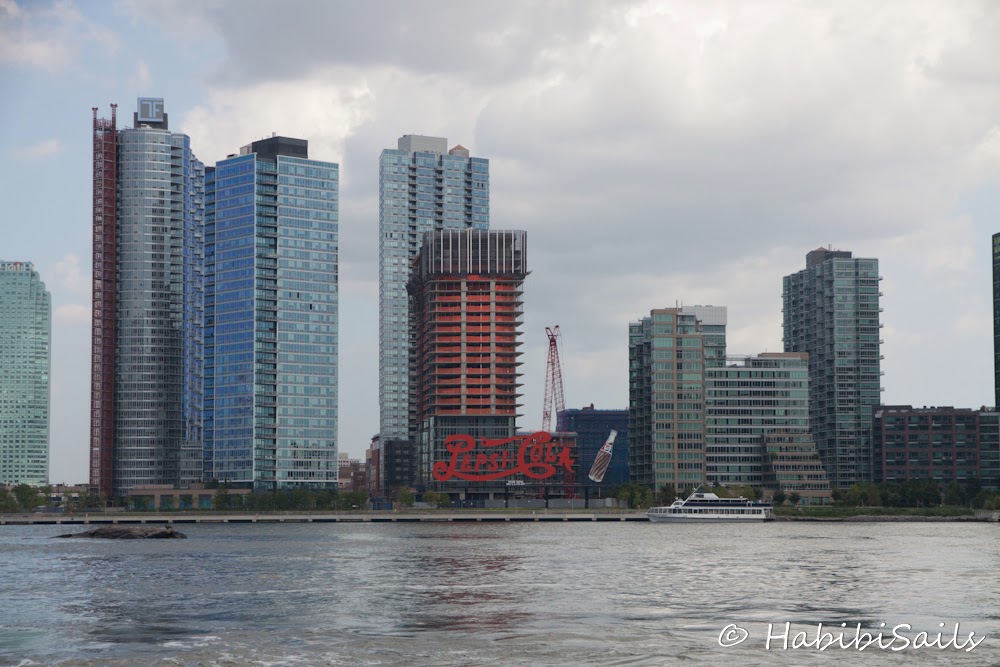 Between Williamsburg and Brookly Bridge we were flying! Our SOG (Speed over Ground) hit 9.4 knots which means the strongest current we had was approximately 3.4 knots. 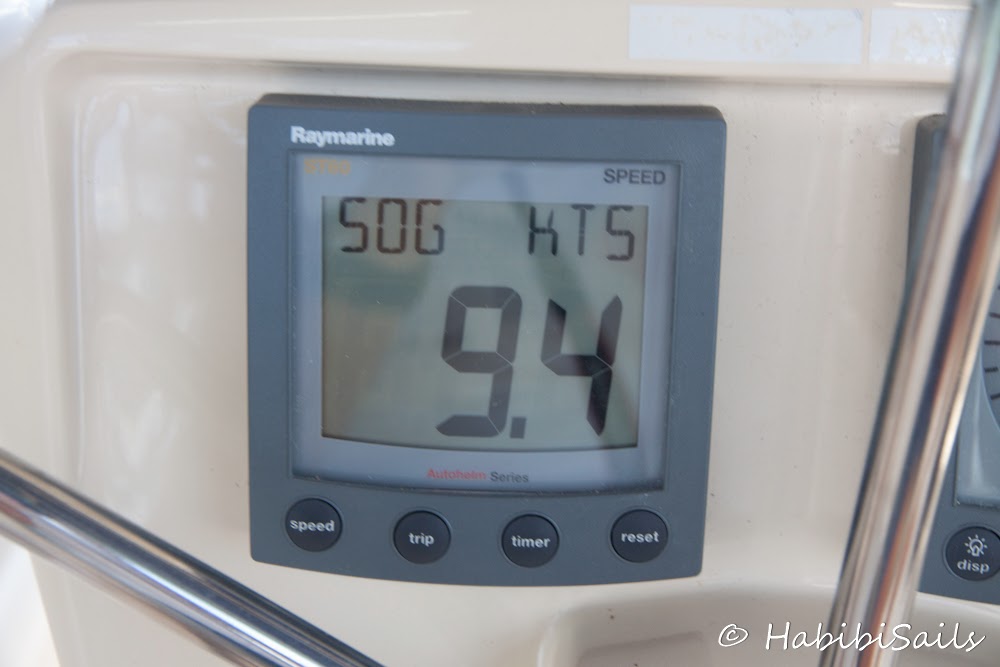 Around the Battery it got a bit more busy and choppy because of the water taxis, ferries, Cruise Ships and weekend traffic. 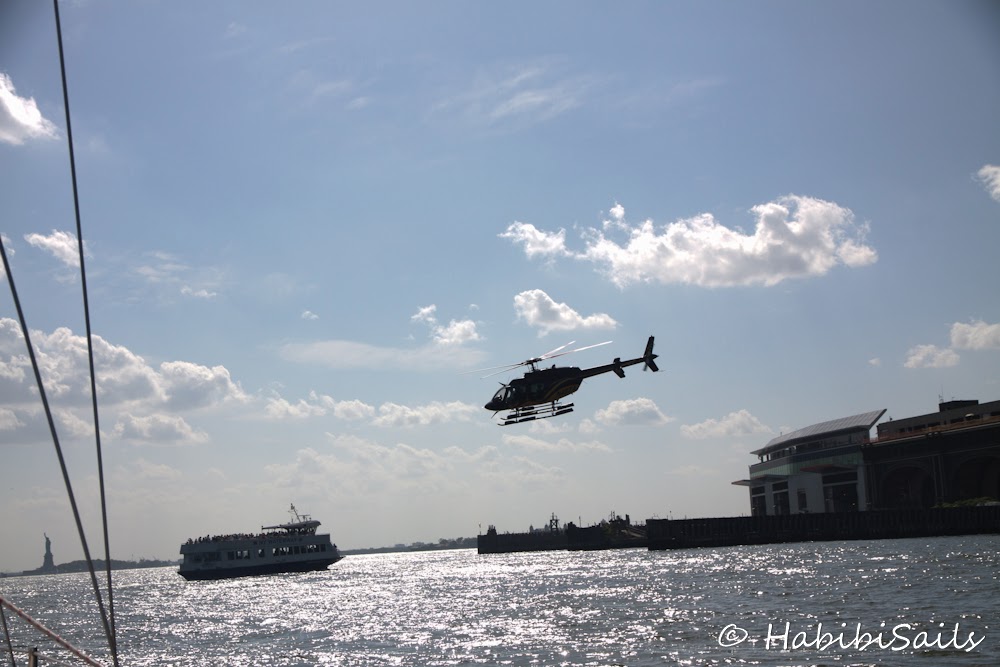 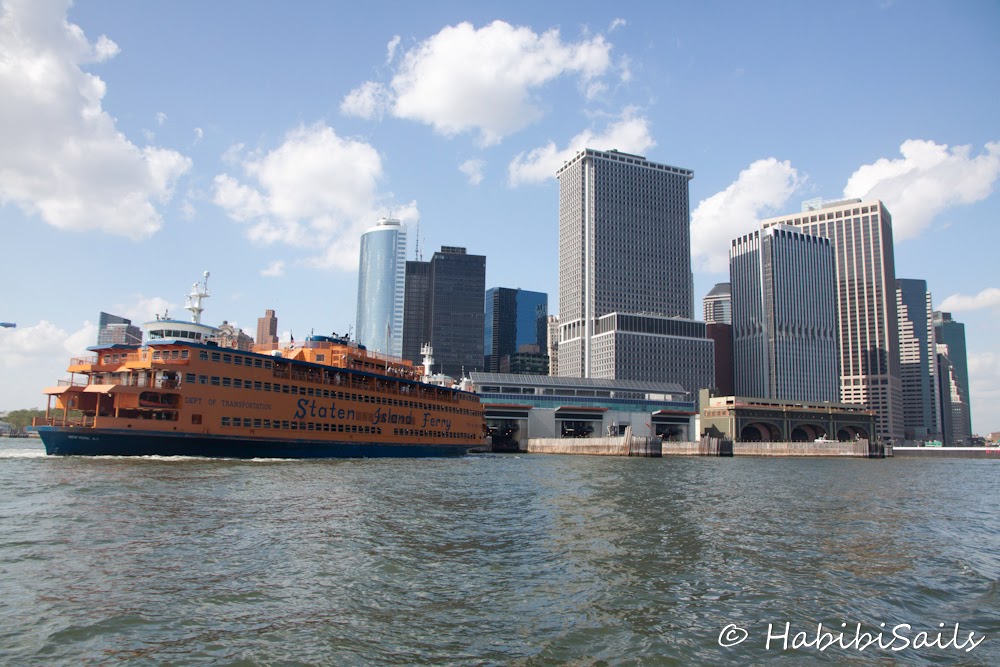 But soon we were past all that and threw a last glimpse at the skyline of New York City. 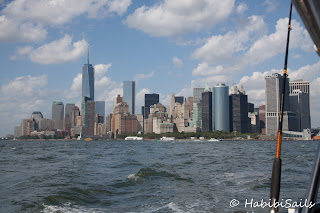 But one last highlight was still waiting for us - The Statue of Liberty, standing proud on Liberty Island! 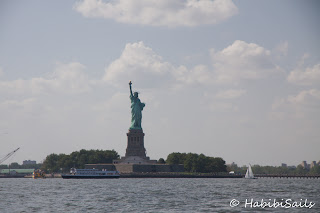 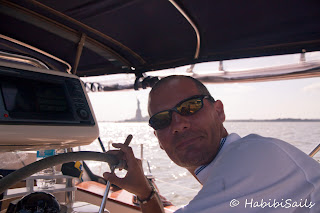 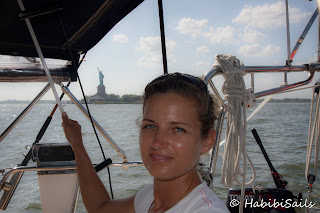 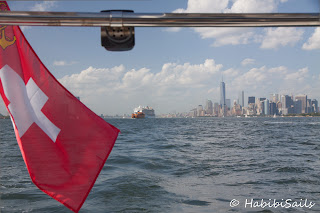 The trip through the Narrows down to Sandy Hook where we dropped the anchor for the night was almost a piece of cake - a quiet, uneventful sail on a calm and hot summer day.
No comments:

Promote Your Page Too